Was the America Founded as a Christian Nation? 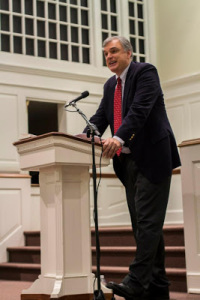 Politicians often say they want to “reclaim” or “restore” America. This usually means they are calling for a return to the nation’s Christian’s origins. But was America founded as a Christian nation? If it was, can the U.S. be understood as a Christian nation today given its diversity? Historian John Fea takes a careful look at the history of Christian-nation debates and will help us to see past the emotional rhetoric of today to the recorded facts of our past.

This is the third forum of the American Myths series: A myth is not necessarily the same thing as a lie. Myths are stories that help societies to express their values, fears, and aspirations.